Have you ever dreamed about flying like a bird, outside of a metal can with a windshield? Now you have a chance to do it in Microsoft Flight Simulator – take on your suit and prepare for a mind blowing experience!

You can hover like a helicopter, or escort an airliner like a jet fighter. Participate in competitions or fly above cities in VR mount. Your only enemies – small fuel tank and extremely sensitive controls.

HOW REAL IS IT?

We are not trying to build a copy of any real aircraft. However, we are trying to make it fly at least somehow realistically for given specifications, in the existing limits of MSFS and our knowledge. Please consider JW1 as an evaluation of simulator capabilities rather than an attempt to create a flight trainer. Any experience you will get with this add-on can’t be used in real life, both for flying or aircraft building.

Project finished! Get latest freeware or payware version and enjoy the freedom. You can always leave feedback or report issues in comments below or in our Discord.  Some technical limitations exists that we can’t affect anyhow, but they will be solved by MSFS developers with time.

You got fully working aircraft without payment, with full support, without usage time limits. If you like this add-on and wish to continue to use it, please purchase JW1 SkyPirat on SimMarket. You will also unlock some additional features.

How to get JW1 SkyPirat

Unpack folder touchingcloud-aircraft-jw1 into Community directory of MSFS, launch simulator. You can use an add-on installer if you have any.

To install alternative flight model, after main files already unpacked (previous step), copy content of maxx2504-flight-model into community folder. Alternative FM is more stable and predictable – jetpack will fly like a small plane rather than body attached to the wing. If you feel default one too hard to control – try new one. If you are happy with “challenging” style of default FM – you better stay on it.

Yes, almost. We had an idea of Helmet Mounted Display implementation, which means avionics symbology is always in the middle of the screen. We have succeeded partially – it works with mouse camera controls, with some limitations, but currently MSFS SDK does not provide a way to get VR/TrackIR head rotation data. So by default the symbology screen follows the mouse view, while for head trackers you can use Spoilers axis to control the vertical position of the display manually. Model itself is fully supported by VR, you just need to configure controls for your needs – spoilers, flaps, gears and taxi lights.

This is a classic aircraft with longitude engines thrust vector. Only difference – it stands vertically on the ground, like a rocket. Custom avionics perform stabilization during takeoff/taxiing, and also provide control assistance at airspeed less than 100 knots.

During stabilization or hovering you will hear a variometer sound. But unlike the glider’s variometer, it will notify you about vertical speed rather than total energy. Interval beeping – you are lifting, solid – sinking. Landing and navigation lights will be activated on stabilization toggle automatically, which can be used for indication at third person view camera.

Before takeoff, ensure all engines are running and you have enough fuel for your flight. When the fuel level is less than 10% you will hear a warning sound. This aircraft does not have a realistic startup procedure, just press Ctrl+E to start all engines, or Ctrl+Shift+E to stop. If, for some reason, ignition does not happen after a while, you can simply slew into the air with Y > F4 > Y and engines will be forced into operation state. Check Flight Assistant panel – all AI assistance features should be disabled.

For takeoff, take a vertical position – use a stick to control attitude. Set Flaps to #2 position (Stabilization), increase throttle to maximum and lift off. Slowly push the stick so the wing will get into 45 degrees pitch level and start to speed up slowly. When you reach ~50 knots and get enough altitude, proceed to horizontal flight and prepare to cruise flight – after you reach 100 knots stabilization will be disabled automatically.

To avoid camera shaking during takeoff and hovering, activate Fixed camera – Back (External 1) or Front (External 2). Fixed camera can be enabled by keys Ins > End, key A to toggle views, Ins to disable fixed camera. 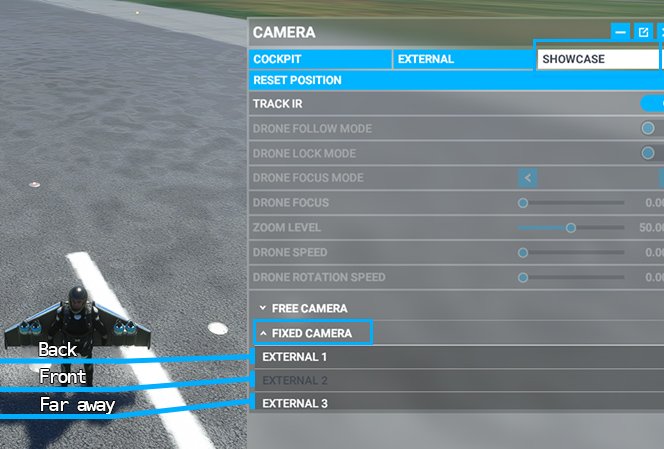 During flight beware of stall conditions – human body takes role both of fuselage and control surfaces, rough actions can cause flipping, stalling and crash. If it happened, enable stabilization and try to transit into hover before you reach the ground.

Head up display has two modes – two axis controls by mouse and vertical control only by SPOILERS handle. First one is active by default – symbology will follow the center point of the view. This method does not work with VR and TrackIR due technical limitaions! For the second, set SPOILERS HANDLE action in MSFS controls settings (you may need to set Filter to ALL to see it) on some of the joystick axis, now you can move symbology area up and down by this handle. You still can force the first method by pulling the handle in 100% (top) position. 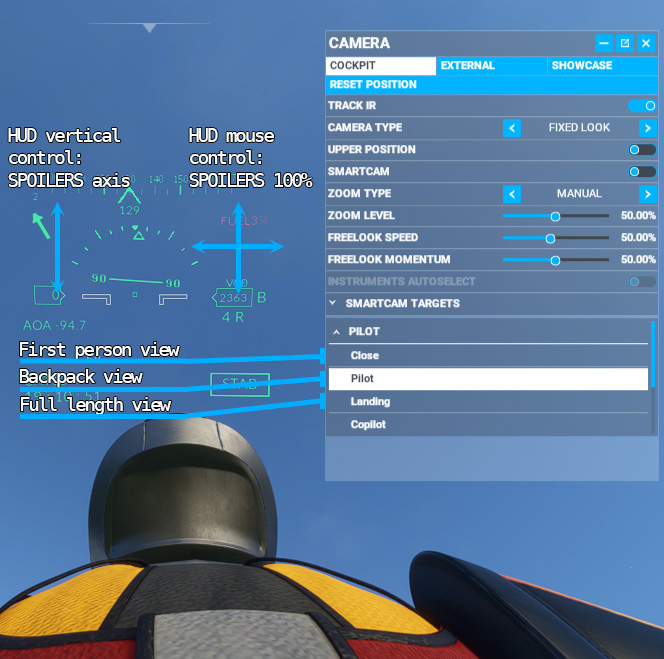 You are able to get inside of another aircraft, vehicle or any other sim object or point of interest. Even windsock. To trigger “scanning”, toggle Taxi lights by related hotkey (you need to set it on the controls page, Alt+J by default), or by common key Toggle lights (you may need to press this one several times). After scanning is activated, you will hear beeping sound and also SCAN label will appear on symbology display.

When you are closer than 30m to the center of some object, you will be “attached” to it by custom avionics script, which will mirror carrier velocity and rotation angles to you. Aircraft has priority above pilot models, so if you connected to the pilot of AI airliner – you will be reattached to the aircraft itself automatically. Search radius will be increased to half of the carrier wing span, plus 50% of current airspeed (to hold you attached at high air resistance conditions). However, it is not recommended to choose a carrier with airspeed faster than 200 knots for online player, 300 knots – AI aircraft.

Display symbology label ABRD will appear, fuel level will raise slowly while you are attached.

There is a huge limitation in MSFS – only AI and generic planes visible by SimConnect as aircraft, which provide various avionics data (like velocity), while other online player’s aircraft visible as Pilot models which have only rotation angles and location. So you will have worse experience while aboard other player aircraft compared to AI/generic plane.

Live traffic and multiplayer planes disappear when you are close enough, while AI generic planes and replay objects stay visible.

If you want to leave the carrier – toggle Taxi lights so you will no longer be held by script and proceed to normal flight. If altitude less than 10 meters and airspeed is low – you will be “teleported” on the ground surface to avoid crash triggering.

During scanning, you will see indication of nearby objects on the display (SkyPirat). Indication very inaccurate while hovering or standing on the ground, better during cruise flight.

– smoke displacement (still may happen randomly)
– while staying on flat surface, body fall on the back
– downwash and heat blur effects are broken, disabled temporarily

Feel free to report issues you will find.

1. Free flight (stabilization on the ground only)

2. Vertical stabilization, toggle landing lights and beacons for indication; turns off automatically at 100kn, before landing – switch flaps to position #2 or #3 manually

3. Stable hover (not simulated yet)

Materials almost finished, geometry haven’t changed much yet as we are working on compatibility with 3D painters

Flight model is minimally realistic, behavior is not perfect (compare to videos) but good enough for testing. Moment of inertia and controls effectiveness will be revised in the future.

Hovering stabilization script has working inertia compensation, so when you in the air – it trying to stop you. Before, pitch/heading compensation were active to force model stand on the ground, but it behave really bad so disabled in this version. When you stand on the ground, use the stick to balance on your feet. Most problematic transition form hovering to horizontal flight – aircraft very unstable, it will be fixed in next update.

No progress with sounds yet, default FSX samples used temporarily.

Effects (downwash and trail) mostly working but still buggy due to effects editor bugs (you can notice trail not always appear, or looks different on other players)

VR technically supported but not much VR-freandly features yet. You can use 1st person view camera but you need to hide pilot head – just toggle parking brake (will happen automatically later), also sort of IHADSS in plans, if technical limitations will be solved.

I downloaded v.097 and unpacked in the Community folder, but I down’t see it in game? Any ideas, what I maybe do wrong?

Normally it should not happen – are you sure this is the right folder, do you have any other add-ons installed that appear properly?
If you familiar with developer mode – you can check the console (` key) for errors with “JW1” in the name – type it into search field on top side of the console, maybe something like “files not found” will be found. If no matches at all – game have not even tried to load aircraft, probably files copied in a wrong place.
Let me know if issue still not fixed, I can try to assist you personally.

some minutes ago i bought the jetpack from:
https://secure.simmarket.com/touching-cloud-jw1-skypirat-msfs-(de_15509).phtml

i can’t start the engines with ctrl + e and also the flaps doesn’t really work. Please check this out 😉

i have installed all updates and the other add-ons works good.

the jetpack looks quite good!

Hi! That is not okay – engines should run straight after flight start.
What happen on pre-flight cinematic, do you hear engines sound?

Try to start flight in the air (point on random place on the world map).

And ensure that you are using latest SimMarket version – 0.9.11 as previous had issue with mixture handle.

Have some questions? Cancel reply