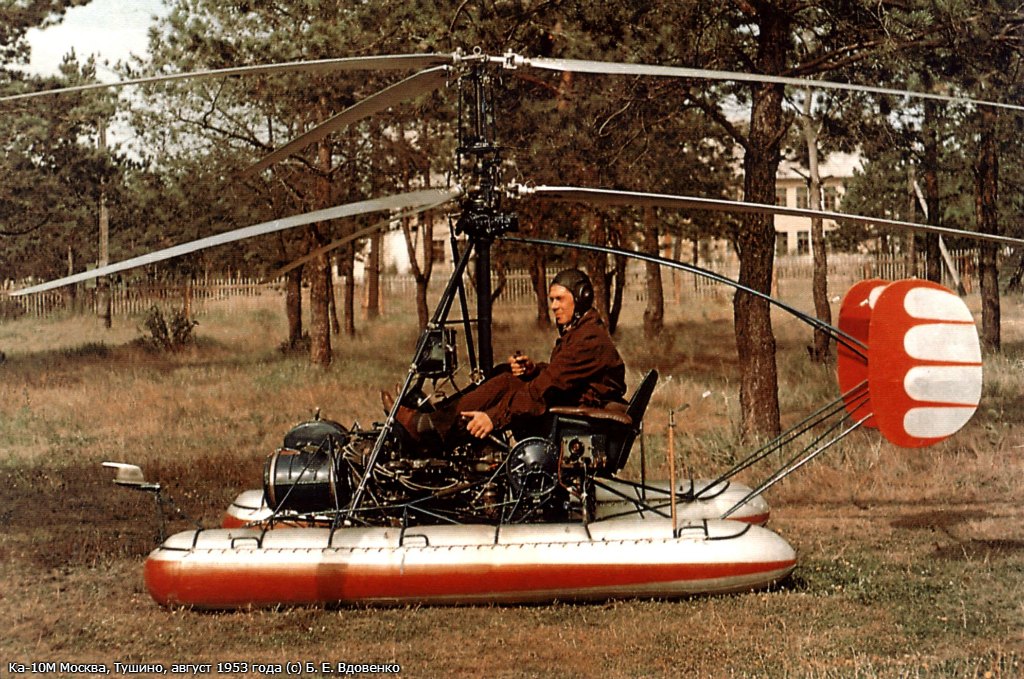 The Ka 10 was a development of Nikolay Kamov’s earlier Ka-8, which had been successful enough to allow Kamov to set up his own OKB (design bureau) in 1948. The Ka-10 made of similar layout to the Ka-8, with an open steel-tube structure carrying an engine, a pilot’s seat and two three-bladed coaxial rotors. It was larger, however, with a revised transmission and rotor hub design, and a new engine specially designed for the helicopter, the 41 kilowatts (55 hp) Ivchenko AI-4 flat-four.

The Ka-10 made its first flight in September 1949. Three more prototypes followed, which were evaluated by Soviet Naval Aviation. A Ka-10 was displayed at the 1950 Tushino Air Display, and one made the first landing by a Soviet helicopter on the deck of a ship on 7 December 1950.

In 1954, 12 of an improved version, the Ka-10M were built for the Maritime Border Troops. They had a twin tail rather than the single vertical fin of the Ka-10 and modified rotors and control systems. 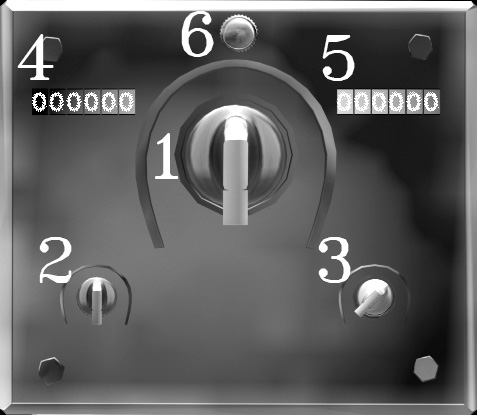 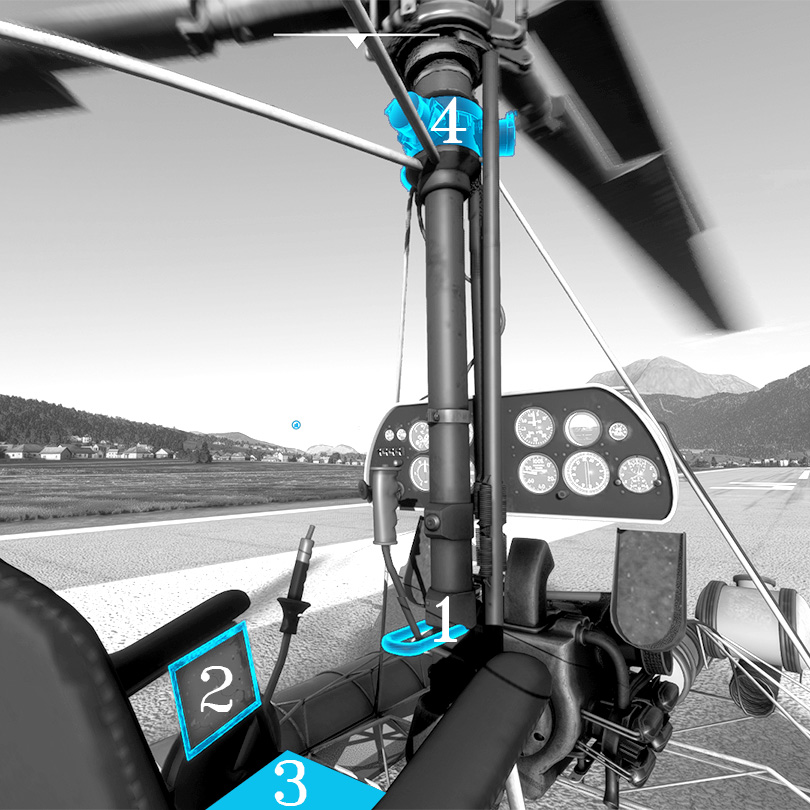 2.2.1. Slowly push mixture handle until RPM needle will go down, then pull handle back on about 5% (1.1.4). This way you will get optimal fuel consumption for current conditions.
2.2.2. Enable navigation lights (1.1.3)
2.2.3. Enable landing light if required (1.1.3)
2.2.4. Raise collective slowly until helicopter lift off
2.2.5. Hover for 1 minute ~1 meter above ground, engine RPM should be stable (around 100%), no lift losses should be experienced.
2.2.6. Raise collective to maximum and pitch down a bit to gain forward velocity. Follow the flight plan route.

2.3.1. Head to the landing area
2.3.2. Hold such airspeed and vertical velocity so you will approach the landing area at 10 meters altitude above ground level.
2.3.3. Right before you reach the landing area, pitch up and transit into hovering.
2.3.4. Hold sink velocity near 0.5-1 m/s, do not exceed this value to avoid vortex ring appearance.
2.3.5. After landing, lower collective to minimum

2.4.1. Head to the chosen water reservoir
2.4.2. Hold 50km/h airspeed and 1m/s sink rate until you touch the water surface
2.4.3. Right before touchdown, pitch up to avoid the flip
2.4.4. After touchdown, set the collective lever to half position and float to the chosen dock

In case of engine failure or fuel low during flight, the rotor will no longer create lift and you will need to perform autorotation landing.
During autorotation aircraft glide with constant vertical (negative) and forward (positive) speed at such pitch angle so airflow spin up the rotor and create air resistance. Important to understand that final rotor RPM depends on total velocity (higher velocity – higher rotor RPM) and rotor blade pitch (higher pitch angle – lower rotor RPM). You have to avoid rotor RPM to exceed 100% as it will cause gear damage, use the collective to keep RPM around 80%-100%. 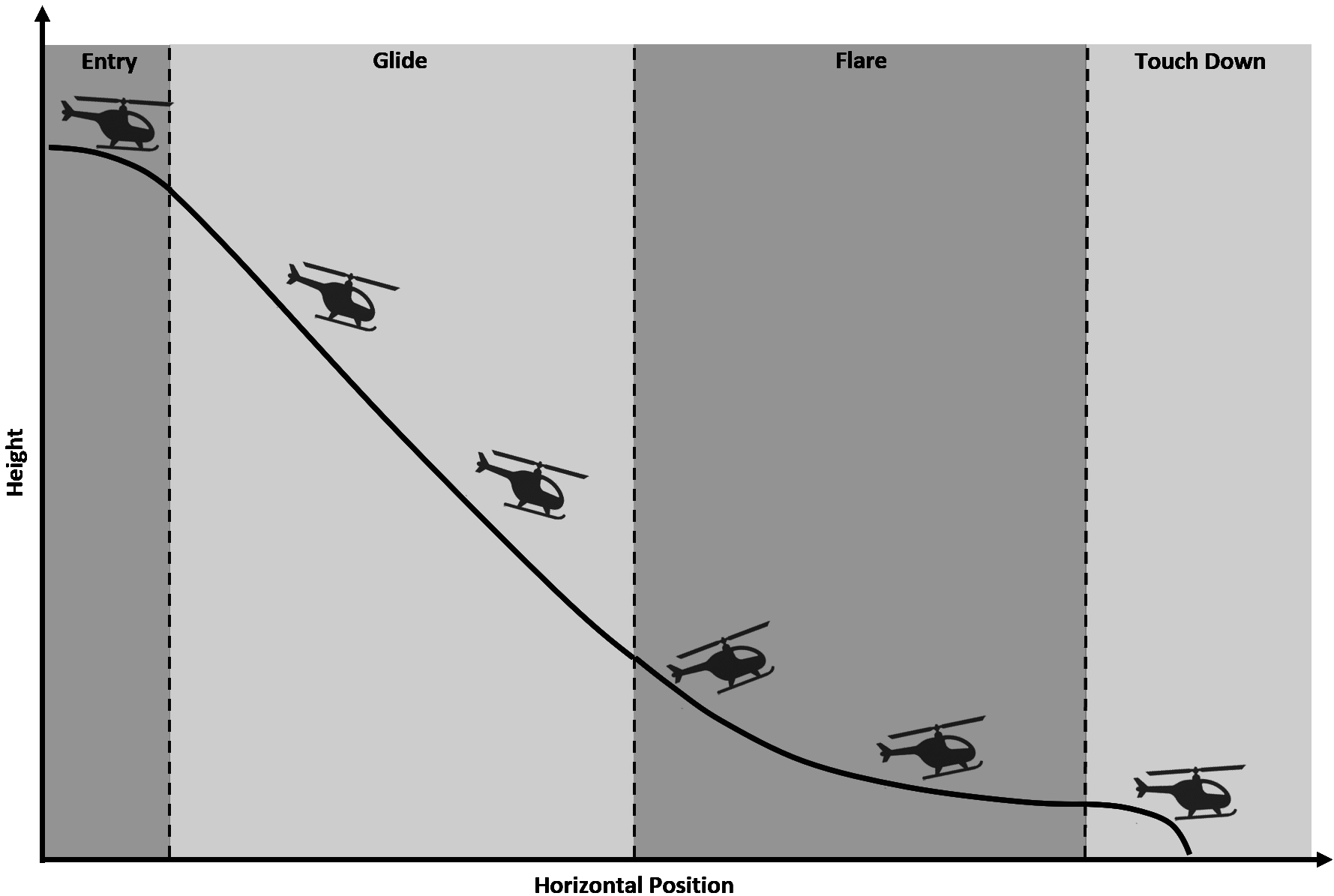 2.6.1 Once engine failure/stop happen during the flight, lower collective and transit into entry state – pitch down to gain forward velocity and almost equal sink rate.

2.6.2 When your rotor RPM reach at least 80% transit into glide – pitch up so rotor RPM stays constant while sink rate is about 5m/s

2.6.4 ~5 seconds before touchdown transit into flare – pitch up and raise collective about 1/2 or 2/3 to decrease sink rate to 1m/s

For gamepad users (most XBOX owners) Increase REACTIVITY value of left stick (both axes to max). You can create new preset “KA10” to switch between them easily anytime.
Reason – reactivity makes aileron and elevator react smoothly on your actions, but chopper require quick controls as it does not have any kind of stabilization helpers. 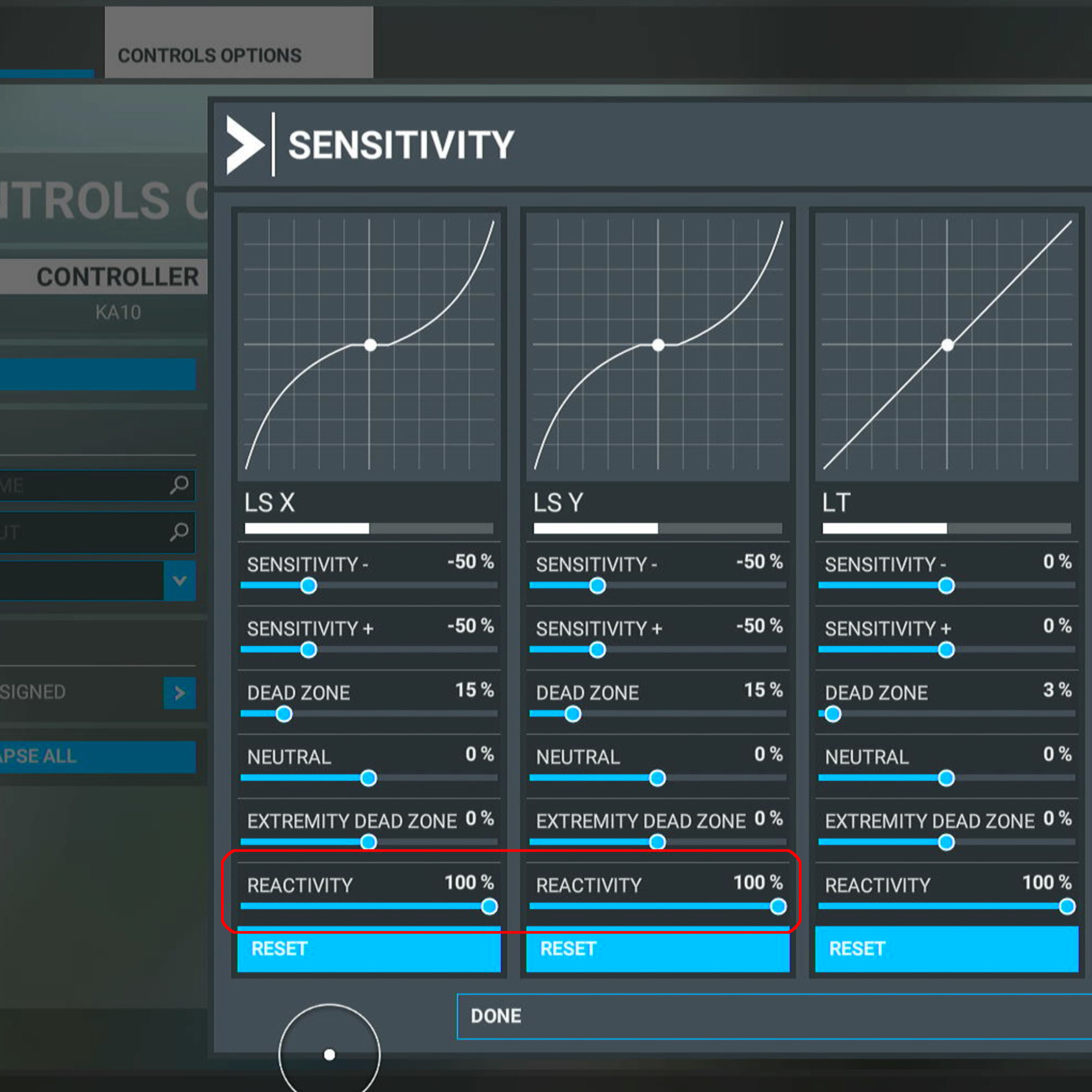 Even if original helicopter does not have trimming, you still can use it in MSFS.
For XBOX gamepad: after you transit from hovering into cruise flight, hold RB and RIGHT STICK FORWARD. At some point you will be able to release LEFT STICK into neutral position and continue the flight with forward velocity

In the default Helicopter controls preset left and right triggers of Xbox controller used as Tail Rotor trim. However, Ka-10M does not have tail rotor so there is no torque moment created by its rotation. To make turn controls more comfortable, you can assign LT and RT triggers to the Rudder Axis events, and remove them from the Increment/Decrement Tail Rotor. This way it will work similar to the airplane rudder controls – reset to neutral once trigger released.

During flight, you may experience engine power loss, in rare case – combustion failure. To prevent it:

During flight through the clouds or mist at low temperature conditions, blades may be affected by icing. This helicopter does not have blades heater or any kind of icing detection, so you need to control icing level visually.
If icing condition is heavy which affect flight dynamics, perform landing immediately.

It has status “Testing”, they have not contacted us about issues yet. I can guess many other devs releasing products and updates on holidays which makes MS stuff busy.

MSFS store always will have such problems:

1. updates release delay of 1-4 weeks
2. no branded or mature content
3. no way to mod aircraft files

But same time it has widest audience and easiest installation process. We can only follow their rules and can’t avoid such issues I am afraid.

Yes, moving collision surfaces are not calculated by sim quite accurate. It became less noticeable if moving is really slow, but still happens. I have noticed it feels little better when parking brakes engaged, if you are using some other aircraft than Ka-10. Also ensure aircraft parts (like wings or tail) does not touch carrier body.

On moving carrier – currently no way. For static carrier runway and helipad points will be also added in next update. However, you made me think about possible solution as teleport button for the panel – you still should start flight in the air but then get on the deck in one click. We’ll see how it may work.

Hi There,
I see that you added a new test version v2.2.1 on your site.
I purchased mine from simmarket which still is on v2.1.1.
I there a chance I can download this new test version a well ?
Thanks, Marc.

New version available on SimMarket now. Marketplace staff do check each update content manually so it takes about 6-12 hours until update reach customers, depends on time of the day and day of the week.

Hi,
Thanks for the latest version. Teleport feature works for me.
I am puzzled about the real time sync feature.
Can you explain me what it is for ?
Thanks,
Marc.

1. Live weather AND Real Time are active (in MSFS weather settings)
Each half hour carrier group position will reset to the origin. If you just start the flight, script will teleport carrier group into proper position for this stage of the cycle. This way teleport on deck feature will work as script can predict where carrier is right now, but also all other players flying around (with live weather, real time and real time sync enabled) will see it in almost same position (some inaccuracy may be). So while you landed on moving carrier, other players will see it correctly.

2. Live weather or real time is disabled
Each half hour carrier position will reset as well, so teleport feature will work same way. But because your sim time is random – you will see carrier in wrong position compare to other players. So this solution works for teleport but not for multiplayer experience.

All true – MS marketplace current version is 1.x which does not have carrier yet.
We are fixing last issues and will send update for approval on Monday, It will take 5-10 days for MS team to test it and add into marketplace.

As the mechanic for the Kamow Ka 26 at INTERFLUG, I’m looking forward to the Ka-10 for the MSFS and can’t wait!

Yep, imperial value is incorrect. Thanks for the heads up.

Have some questions? Cancel reply